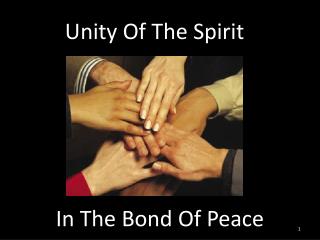 Unity Of The Spirit. In The Bond Of Peace. 1. Introduction To Unity. Psalm 133. RITES OF PASSAGE - . self. culture. god. divine order. god. self. others. the miracle inside you. father son

Happy Happy! Happy! - . not actually related . unity through acts 15. once upon a time there was a crisis of unity in the

The Helper - . a study of the holy spirit by catherine marshall. part -4: chapters 1-7 how the helper ministers to me at

The Holy Spirit - . lesson 4 miracles have ceased. the holy spirit. he is god inspiration, revelation and confirmation of

The Holy Spirit - . lesson 2 inspiration, revelation and confirmation of the word. the holy spirit. he is god

Led by the Spirit - . class 2” “the operation of the spirit” winfield bible school august 2014. connections from

HOLY SPIRIT LESSON III Providence - . holy spirit review of lesson i. the holy spirit is not: an “it” a “thing” a

How To Communicate With And Attach To Your Child - . stephanie fidler, psyd licensed psychologist. god did not give you a

Ephesians 4 - . the unity of the church is only possible if there is a corresponding life change of all