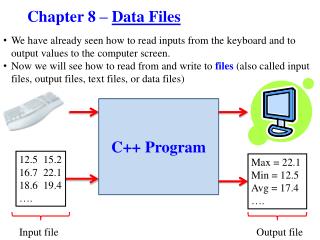 We have already seen how to read inputs from the keyboard and to output values to the computer screen. Now we will see how to read from and write to files (also called input files, output files, text files, or data files). Chapter 8 – Data Files. C++ Program. 12.5 15.2 16.7 22.1 Chapter 2 Data Design and Implementation - . lecture 4. the representation of information in a manner suitable for

“LAG with a WHERE” and other DATA Step Stories - . neil howard a. table of contents. chapter 1 “lag with a where”