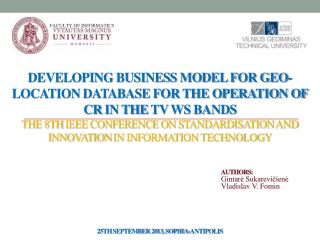 FACULTY OF INFORMATICS. DEVELOPING Business Model for geo-location database for the operation of cr in the tv ws bands the 8th IEEE conference on standardisation and innovation in information technology. Authors : Gintarė Sukarevičienė Vladislav V. Fomin. September 25 th , 2013 - Exchange programme between the cornell university and the school of civil engineering of the

C0x: An overview Sophia Antipolis - 2. abstract. a good programming language is far more than a simple collection of

Available from: 25 th September 2013 - . tam baillie is scotland's commissioner for children and young people and his job

September 25, 2013 - . do now : briefly summarize last evening’s homework assignment in 3-5 sentences. what was the

A Garden of Models Steps Toward Growing the Topology of the Possible In Public Policy Modeling - . carl tollander

Chem 108: Lab Week 9 - . sign in confer with partners from last week &amp; week before. do: alcohol distillation to