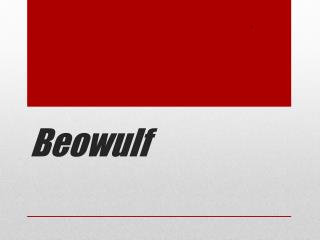 Beowulf. Beowulf is the first great work of national literature. Like most heroic literature, Beowulf is oral art. This epic was composed between 700 and 750, but depicts the world of the early sixth century (500s). . Background.

Beowulf - . themes. the importance of establishing identity tensions between the heroic code and other value systems the

Beowulf - . an epic of good vs. evil. what is beowulf? who is beowulf?. beowulf is an epic poem that tells about the

Beowulf : Lines 1681-1750 - . hrothgar looks at the hilt beowulf gives him. it is etched with images of history. beowulf

Beowulf - . day 8. warm-up. warm-up – what are five things in beowulf that you are confused about? how can you

Beowulf - . beowulf manuscript background . beowulf is the first surviving epic written in the english language. the

Notes on Beowulf - . lines 836-1650. similarities shared by beowulf and sigemund. the story of sigemund’s exploits

BEOWULF - . beowulf. written in old english sometime before the tenth century a.d., describes the adventures of a great