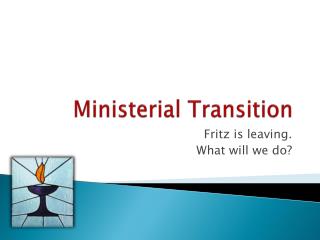 Ministerial Transition. Fritz is leaving. What will we do?. There’s help!. The Unitarian Universalist Association (UUA) and the Midwest Region District of The UUA Have lots of experience helping congregations finding a new minister They know what does and doesn’t work