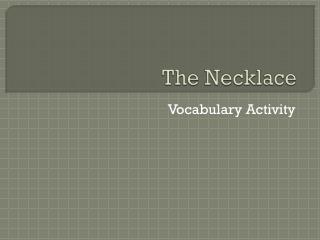 The Necklace - . guy de maupassant. connect to your

The Necklace - . guy de maupassant. connect to your life. status is defined as the standing a person has in a group to

“The Necklace” - . vocabulary. dowry. front of flash card. write the definition : (noun) money given by the father to

“THE NECKLACE” - Vocabulary . “the necklace”. rueful . felling sorrow or regret with a rueful sigh, she picked up