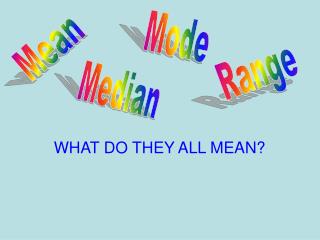 Mode. Mean. Range. Median. WHAT DO THEY ALL MEAN?. All of the previous words can be summed up with the phrase MEASURES OF CENTRAL TENDENCY. Mean. This is what we usually mean when we say “What’s my average.”. We could say, “What grade do I normally get?”. MEAN - . that was a mean trick you played on your little brother. the mean temperature in winter hovers just above

Mean Perfect - . who says we're all in this together . albert einstein looks like a wacky old man, but was probably the

mean (average) - . mean value of all measurements = ((each value observed) * (number of times it is observed)) / (total

Say – Mean - . say: what does this cartoon tell us or show us? mean: what is the author’s message? what is its