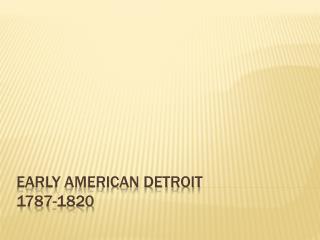 1787-1820 - . timeline. 1787 - constitutional convention- held in philadelphia to fix the articles of the confederation

American Romantics: 1820-1865 - . a journey away from the corruption of civilization and the limits of rational thought

The American Revolution and Confederation, 1774-1787 - . apush. first continental congress. all colonies except georgia

Early American Settlements - . american colonization. why would anyone want to come here?. profit freedom of religion

Early American Civilizations - . the earliest americans. between 30,000 – 10,000 bc, nomadic groups crossed a land

Early American Music - . in order to fully appreciate the origins (beginnings) and purposes of music from any era (time

Early American Wars - . under what circumstances should the united states use force against other people or countries ?.

Aim: How was the United States Government designed after the Constitutional Convention of 1787? - . do now: what can you