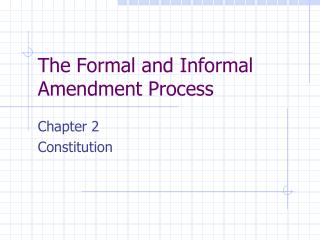 The Formal and Informal Amendment Process The Formal and Informal Amendment Process. Chapter 2 Constitution. Formal Amendments. 4 methods All similar 27 formal amendments over the last 226 years. Methods. 1 st method 26 of 27 happened this way Proposed in congress by a 2/3s vote in both houses

The Formal and Informal Amendment Process

Informal Commands - . informal commands. to give a command in spanish, you must first decide whether you wish to use an

Formal vs Informal E-mail - . the structure and language in your email communicates a lot to the recipient. look at these

Informal vs. Formal Language - . when and how to use formal or informal language amanda wieland. but first!. a short

3. Families or organisations? Formal and informal systems of support - . overview of lecture. 1.   informal support at

Formal &amp; Informal Language - . how we speak says a lot about us!. informal writing. the way people speak to each

Social Work Virtual Campus - . the curriculum plan for community work from an international perspective. agenda. about

Formal Amendment to the Constitution - . the constitution provides for its own amendment — that is, for changes in its

How to amend the Constitution? - . formally and informally. formal amendment of the us constitution (article v). 2/3