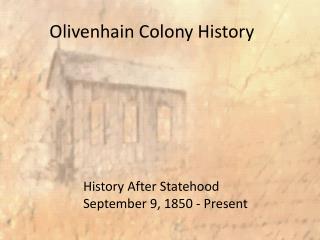 From Trustee Colony to Royal Colony - . trustee period: 1732-1752 referred to as trustee georgia because during that time

Plymouth Colony - . separatists. protestants in england were unsatisfied with the anglican church (church of england)

Jamestown Colony - . first successful english colony in the new world. the student will demonstrate knowledge of the

EMBASSY @ COLONY - We’re excited to share this promotion from our in-house cafe,

Georgia Colony - . by john hinson. motivation. james oglethorpe, who was a british member of parliament establised the