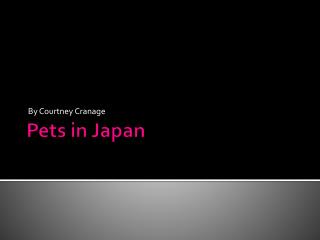 By Courtney Cranage. Pets in Japan. Pets and Japanese Society.

single dog bowl stand - People having pets in their homes, should try to find the best eating bowls for their dogs. in DOGS A-Y - . cause their isn't a dog with the name that starts with q or z. a akita. origin: japan group: working use:

Robotic pets - . presented by: roberta neer for professor: labelle. what will be covered. types of robotic-pets real pets

All About Golden Retrievers - Livingthepetlife.com provides the best possible care for your pets with safety &

New York pets - From tortoises to goats to rats, a look at the pets of

Topic 4 – Japan and its Corporate Hegemony - . a – geography and the insularity of japan b – japanese development c

Japan - . how did the edo era of great peace begin?. in the 16 th century, japan was divided into about 250 smaller

The rise and fall of Imperial Japan. (by KA) - . the pacific ocean. the background. western countries merely wished to