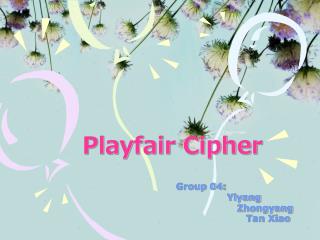 Playfair ciphers - . matrix-based block cipher used in wwi in a 5x5 matrix, write the letters of the word “playfair”

Cipher Office - The battle box is the underground command centre constructed under fort canning, singapore as an

Monoalphabetic Cipher - . rather than just shifting the alphabet could shuffle (jumble) the letters arbitrarily each

Vigenére Cipher - . kimberly chiffens &amp; maria jannelli. what is it?. cryptology is the science of securing

Vigenère Cipher - . like cæsar cipher, but use a phrase example message the boy has the ball key vig encipher using

Block Cipher - Block of bits. key. block of bits. block cipher. today’s most widely used ciphers are in the class of