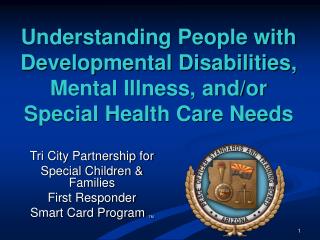 Mental Illness - . refers to a group of psychiatric disorders characterized by severe disturbances in thought, mood, and

Mental Illness - . as a social problem. statistics. 1 out of every 4 americans suffers some for of mental disorder in a

Working with “Special” Victim Populations - . victims with disabilities. you are working with people who have