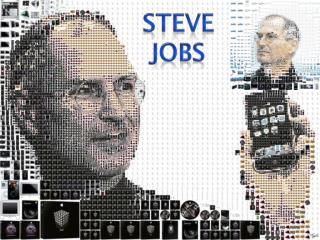 Steve Jobs. Youth. 1955 Feb. 24 Steven Paul is born in San Francisco, CA, soon to be adopted by Paul and Clara Jobs 1973 Fall Steve spends one semester at Reed College, Oregon, then drops out. 1974 Steve gets a job at Atari, and makes a trip to India to seek enlightenment. Steve Jobs - . a presentation for the late great igenius. an

Steve Jobs - . life of a innovator. early life. february 24, 1955 in san francisco steve paul was born, and left for

Steve Jobs - . by : caitlyn. the early year…. steve jobs was born on february, 24 in los altos. steve jobs hobbies are

Steve Jobs - . an american entrepreneur and inventor, steve jobs was the co-founder, chairman and ceo of the widely

-Steve Jobs - “what’s wrong with education cannot be fixed with technology. no amount of technology will make a dent

Steve Jobs - . a presentation for the late great igenius. an

Health Jobs For Me - . a board game full of jobs that keep kids healthy!. instructions:. hand out board, die, and tokens.