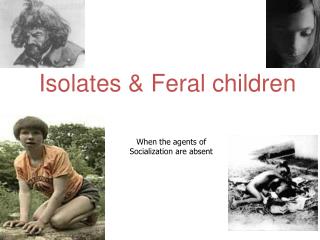 Isolates & Feral children. When the agents of Socialization are absent. What is a Feral child?. Feral (Latin: fera = wild animal) = “wild“, undomesticated Genie - “the feral child” Raised in isolation for 13 years, neglected, and severely emotionally and intellectually

Socialization - . chapter 4.1. what is socialization?. the cultural process of learning to participate in group life. how

Phenotypic properties of S. maltophilia isolates in relation to their genetic subgroups - Institute of functional

Feral Cat Assistance Program - . improving the lives of feral/stray cats in and around greensboro, nc (click each page to

Violence Against Children by Children – a Growing Concern - . violence against girls in africa 11-12 may 2006 united

Socialization - . how we become who we are…. nature vs. nurture (review). twin studies monkey studies (harlow

Nucleic Acid Prep Station - . what we can do for you!. the abi 6100 prepstation. isolates and purifies total rna and