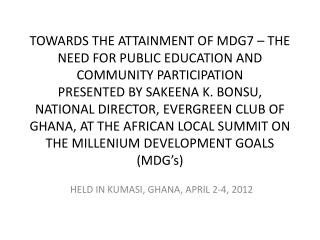 TOWARDS THE ATTAINMENT OF MDG7 – THE NEED FOR PUBLIC EDUCATION AND COMMUNITY PARTICIPATION PRESENTED BY SAKEENA K. BONSU, NATIONAL DIRECTOR, EVERGREEN CLUB OF GHANA, AT THE AFRICAN LOCAL SUMMIT ON THE MILLENIUM DEVELOPMENT GOALS (MDG’s). HELD IN KUMASI, GHANA, APRIL 2-4, 2012. April 2, 2012 - . as you come in … pick up materials at the bp begin work proof-reading and correcting paragraph.

Bellringer April 4, 2012 - . take your chapter 9 notes guide take out something to write with put the rest of your

Spring Fling April 4, 2012 - . what is the mattoon huddle?. membership based group of f ans, p arents and s upporters of