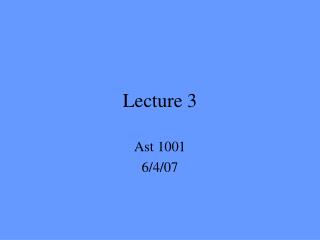 Mandible &amp; TMJ Lecture - . rt 233 week 7. hello class, this is my preliminary lecture, i may add more slides over

Lecture 4 Genes and Their Functions （ 2 ） - . in the previous lecture. heredity materials nucleic acids and their

Lecture 31 E-Marketing - . crm instructor: hanniya abid. objectives. by the end of this lecture you will be able to:

STATS 330: Lecture 4 - Graphics: doing it in r housekeeping my contact details…. plus much else on course web page

Lecture 2 SML: Building of new types - . after this lecture, you will: be able to build and use your new datatypes know