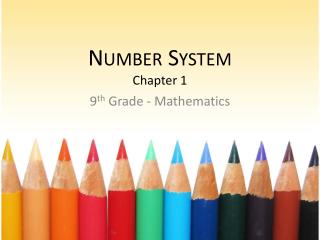 Chapter 1 1 Number Systems - . objectives. understand why computers use binary (base-2) numbering. understand how to

Number System - . prepared by dr. anu gokhale. decimal, binary, octal, and hex. decimal is the number system that we use

Number System - A numeral system (or system of numeration) is a writing system for expressing numbers; that is, a

NUMBER SYSTEM - Numbers and its