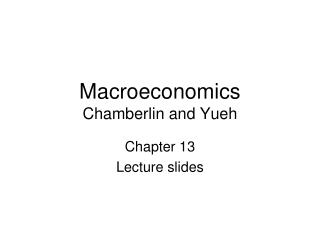 Alexis Chamberlin - Range and viranyi (2013): “social learning from humans or conspecifics : differences and

Author(s): John Chamberlin - License: unless otherwise noted, this material is made available under the terms of the

Let’s Get Cooking!!! with Ben Chamberlin - Teaching meal preparation to students with visual impairments and multiple

Macroeconomics and Inequality - . francesco saraceno the euro after the crisis: lessons from the past and challenges for

Expectations and Macroeconomics - . in the long run workers experience no money illusion which means, actual and natural

Macroeconomics - . unit 8 the business cycle the top 5 concepts. introduction. in this unit you learn about the factors

Macroeconomics - . the study of the entire economy. used to predict economic performance by looking at the past and

MACROECONOMICS - . the study of the major economic totals, or aggregates, such as the nation’s output, the national