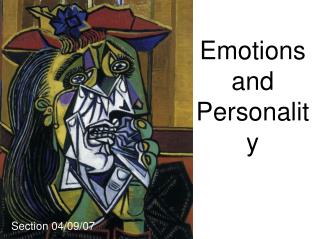 Students will understand how stress, their personality, and emotions affect their - Mental health part 1. ueq: how do i

Emotions and Stress - . chapter 12 lecture 13. emotions. feelings that generally have both physiological and cognitive

Emotions and Stress - . understanding your emotions . emotions – signals that tell your mind and body how to react.

Motivation and Emotions - . motivation …. … is a need, want, interest, or desire that propels someone in a certain

Emotions and Attraction - . by torin hester and rachel ball. an emotion is.. a mental and physiological state

Emotions and Driving - . what is emotion?. the word emotion is used to name a strong feeling. anger, fear, and joy are

Emotions and Knowledge - . 1)emotions as an obstacle to knowledge. traditional view - battle between reason and emotion.

Attitudes and Emotions - . attitudes are judgments emotions are experiences we feel emotions we think about attitudes we

Emotions and Communication - 2. objectives you should be able to:. identify components of emotions.recognize differences