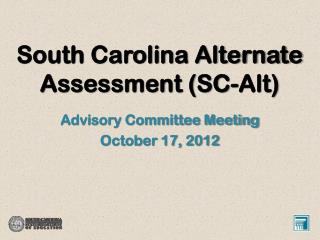 ARD Decision-Making for the STAAR Alternate - . retn etiquette. please turn off cell phones if you must take a call,

South Carolina 2013 PASS March &amp; May Pretest Workshop Welcome! A draft of this presentation has been posted to

Developing Assessment Literacy: A workshop on the relationship between instruction, assessment &amp; evaluation