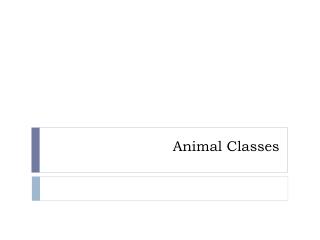 Animal Classification - . project by allison schotte 4 th grade july 27 th 2011. objectives. you will, through the course

ANIMAL CLASSIFICATION - . systematics or taxonomy is the study of the kinds and diversity of organisms. the modern

ANIMALS WITH BACKBONES - . backbone. is an animal's spine. it also means determination and strength. five main classes of

Classification of Animals - . scientists have divided the animal kingdom into two main groups:. vertebrates (animals with

Animal Classification - . from the zoo to you! mego chen tiffany fowler liz margush alyce porawski. what is a

Classifying Animals - . 5 th grade science ms. bridgeland. now that we know how all animals are similar, we need to learn

Classification of Animals - . click to continue. introduction. audience this projects is intended for third grade

Classifying Animals - . animals can be classified into six groups. mammals. what are mammals?. they breathe through their

Animal Classes - . connor c hung. guide:. this powerpoint has been made and must be followed by these rules: most of this

Animal mother and child - Adorable offspring in the animal