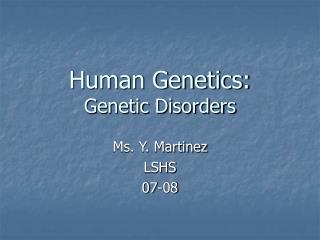 Human Genetics: Genetic Disorders. Ms. Y. Martinez LSHS 07-08. Genes and the Environment . The phenotype of an organism is only partly determined by its genotype . Many traits are strongly influenced by environmental , or nongenetic, factors, including nutrition, exercise and sunlight. Principles of Clinical Cytogenetics - . clinical cytogenetics is the study of chromosomes, their structure and their

Genetics of Human Sexual Development - . warning! if you are legally required to get parental permission before viewing

DNA is the genetic material. The instructions for making and “operating” an organism are written in DNA. DNA is