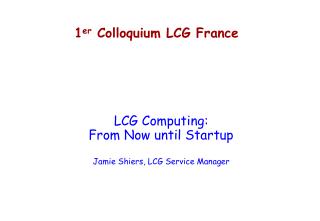 MQA Skills Audit Colloquium 1 - Purpose of this presentation. to address the questions requested of presenters2. how did

University Colloquium - . survey. colloquium- what is it?. it is a required course for all fgcu students. it teaches you

MIS Colloquium - . it and strategic industry transformations dr. joseph mcgill december 1, 2004. questions how does it