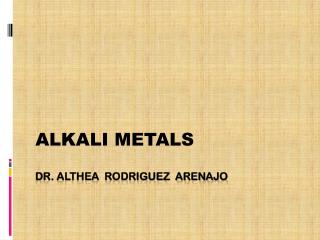 ALKALI METALS. DR. Althea rodriguez arenajo . LITHIUM. The name was taken from the Greek meaning “stone” because it was believed to be present only in stones It was also thought that the salts of litium asssisted in dissolving stones in kidneys and gall bladder To Althea, From Prison - . by: natalie belviso and kaitlyn pepera. to althea, from prison. when (like committed linnets)