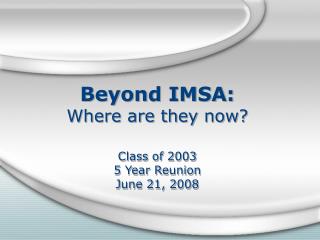 Beyond IMSA: Where are they now? Class of 2003 5 Year Reunion June 21, 2008. Shreyas Bhat University of Chicago ‘07. After IMSA… I traveled to/around India and Europe for a month and a half and recorded an album with my college rock band. I am… Smith Family Reunion - . fun and games. plenty of food. thanks to grandpa smith for doing the grilling. fun and laughter.

Update of ISAs from 2003 to 2008 - . andreas mikromastoras grant thornton greece. introduction and objectives- isas from

Beyond(Band) - . beyond was the top rock band in the area where chinese living. and it founded at 1983 in honk kong.