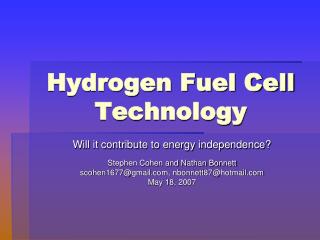 Hydrogen Cyanide - . and the effects it has on the human body. purpose. to understand the dangers of hydrogen cyanide

Benefits and Obstacles to the Success of FCs and the Development of a Hydrogen-Based Economy - Fuel cell. benefits and

Hydrogen Fuel Cell Bus Fleets - . policy description #1 the use of hydrogen as a vehicle fuel :. for the short term

In the Name of God - . isfahan university of technology department of chemistry. nuclear fuel cycle. by: habib soleimani