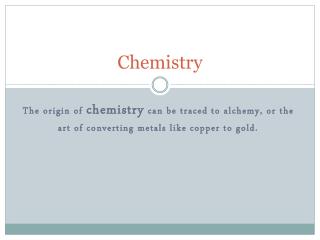 Chemistry. The origin of chemistry can be traced to alchemy, or the art of converting metals like copper to gold . Ionic Bonding. Bonds. What is a chemical bond? Electrostatic forces of attractions (between 2 atoms) between the nuclei of one atom and the electrons of the other atom.