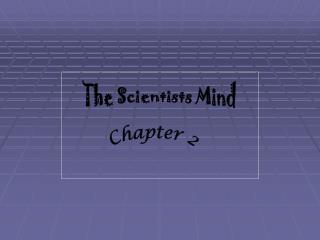 Ask the Scientists - . questions for dr. butner star formation 1/29/11. how can you tell the difference between a star

Scientists - . the atom. democritus . - 400 bc- greek philosopher - no experimenting matter made up of indivisible

The Mind - . what society can do to accommadate learning disabilities. an inside look on mild intellectual disabilty .

Santa and the scientists - . done by: paola , ashling and rhianon3aw. jb. introduction…. children all over the world

Scientists of the Enlightenment - . changing the way we see the world. middle ages. scientific thought religious

famous scientists - Dr. sally ride. she is an astronaut that explores space.she was a tennis player. she even ranked on