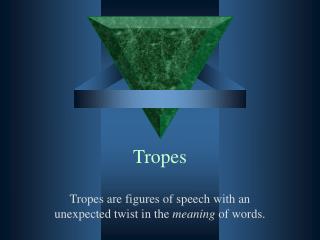 Tropes. Tropes are figures of speech with an unexpected twist in the meaning of words. When something is something else: the ladder of success (i.e, success is a ladder). “The office is a bee-hive of activity on Mondays.” Or recall this old-anti-drug commercial: Tropes - . natalia, betsy, jacky, louisa. tropes. hyperbole - a trope in which a point is stated in a way that is greatly

Figurative Language: Tropes - . change in the meaning of words. figurative language. is language that goes beyond the

TROPES AND SCHEMES - . (in)conspicuous style. tropes. shifts in meaning from the ordinary use of words types include the

SCHEMES AND TROPES - . tropes. trope is a figure of speech in which the use of a word or a phrase other than in its

Tropes and Schemes - . episode ii the tropire schemes back. tropes.

Beyond My Wildest TROPES and SCHEMES ! - . rhetorical tropes &amp; schemes in writing and speech. rhetorical

Brett Young Tropes Comparison 2/16/2012 - . jungle heart of darkness – serves as the back drop for conrad’s journey.

Rhetorical Tropes and the Man of Steel - . morrison and quitely’s all-star superman . question. can recognizing comic

Onomastic Tropes in Harry Potter and The Deathly Hallows - . by don l. f. nilsen and alleen pace nilsen. part one: