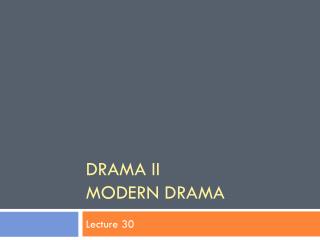 DRAMA II Modern Drama. Lecture 30. Sean O’Casey was born in 1818 and died in 1964 . The play has been written on the background of Irish Civil War , which has been going for centuries. Irish Civil War. Juno and the Paycock: Jingois. Jingoism. flag waving Modern Drama - . a brief introduction to the genre of modern drama and its relevance to miller’s all my sons. what is