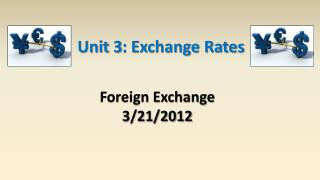 Unit 3: Exchange Rates. Foreign Exchange 3/21/2012. Exchange Rate. exchange rate – price of one currency in terms of another For example: dollars/euro ($/ € ) or euros /dollar € /$) It is important to specify which is the denominator!. Exchange Rate. Unless otherwise specified,

ECONOMIC OUTLOOK - . august 2012. economic outlook is revized in the 1st and the 3rd weeks of the month. recent

EXPOSURE OF FOREIGN EXCHANGE RISK - . foreign exchange exposure is the sensitivity of the real domestic currency value of

Accounting Standard (AS) 11 (Revised 2003) - . the effects of changes in foreign exchange rates mandatory for accounting

Best Practices in Foreign Exchange Fluctuations at the Enterprise Level - . monthly average exchange rates to us$ 2011.