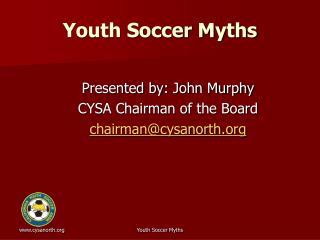 Youth Soccer Myths. Presented by: John Murphy CYSA Chairman of the Board chairman@cysanorth.org. Youth Soccer Myths. A “myth” is a popular belief that has grown up around something Or Something that has an unverifiable existence George Washington & the Cherry Tree. Problems with Myths

Youth Quizzing Ministry - . what is bible quizzing? helps youth study and learn about the scriptures through a weekly

“DEVELOPING THE YOUTH SOCCER PLAYER” The stages for the soccer formation from 6 to 16 years of age - . bruno redolfi

“ I ” Kids Youth Today: Who Are They? - . the roper youth report presentation prepared for the boy scouts of america

GotSoccer - . the largest software provider to the us youth soccer market. gotsoccer. in 2011…. the industry’s best

Mythology – Theories of the Origins of Myths - . today’s objectives: to become familiar with the various theories of

Youth Development - . an ongoing process through which young people attempt to meet their needs and develop the

Treasurer - . our mission. to develop and deliver quality youth soccer programs in a fun, family environment based on our

“DEVELOPING THE YOUTH SOCCER PLAYER” The stages for the soccer formation from 6 to 16 years of age - . bruno redolfi

3D-Biomechanical Analysis of the Soccer Kick - . introduction. we chose to look at the biomechanics of the soccer kick