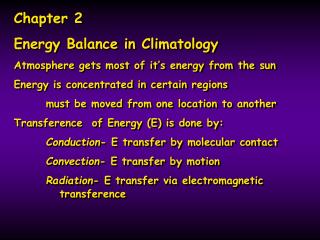 Chapter 2 Energy Balance in Climatology Atmosphere gets most of it’s energy from the sun Energy is concentrated in certain regions must be moved from one location to another Transference of Energy (E) is done by: Conduction - E transfer by molecular contact 1st Law: Conservation of Energy - . energy is conserved. hence we can make an energy balance for a system: sum of the

Chapter 6: Thermochemistry - . ap chemistry. energy. work. the capacity to do work or produce heat. no work. forms of