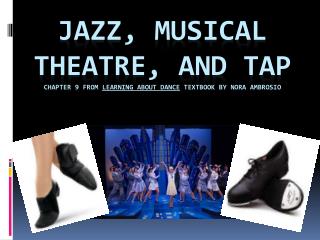 Jazz, musical theatre, and tap Chapter 9 from Learning About Dance textbook by Nora Ambrosio. History of Jazz. Origins of jazz can be traced back to Africa In the 1600’s slaves were brought from Africa to America The slaves continued to dance and drum on the plantations

CHAPTER 9 - . the capital asset pricing model. with shakil al mamun. it is the equilibrium model that underlies all

MUSICAL THEATRE - . where it all began. athens, greece - the birthplace of theatre 4 greek play writes: sophocles,

Chapter 9 - . agility. chapter objectives. after completing this chapter, you should be able to 1. define and measure

Chapter 9 - . practice schedules. your perspective. how do you typically learn a new skill or activity? do you like to

Chapter 9 - . the rise of the kingdom. joshua. entry into and conquest of the promised land (canaan). canaanites.

CHAPTER 9 - . ethics, corporate social responsibility, environmental sustainability, and strategy. what do we mean by

Belly Dancing - Are you looking for belly dancing classes? do you want to learn how to belly dance? did you know that