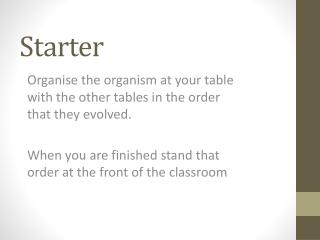 Starter. Organise the organism at your table with the other tables in the order that they evolved. When you are finished stand that order at the front of the classroom. Lesson 13 : Theories of evolution . Objectives: State Darwin’s theory of evolution Starter - . can you pick 3 errors from this. temp = input(&quot;what is the temperature in the house?&quot;) if (

Starter - To understand how the life of zheng he on a junk boat. to understand what was traded back and forth from china

Starter - . http://www.cfa.harvard.edu/seuforum/bb_popup_historymovie.htm what do you think that was about? what was the

Starter - . all food types go through different processes on the journey from origin to plate. the class has been divided

Starter - . 1. starter 1. divide the students into groups. ask them to make lists. ask students to read their lists.

Starter - . identify the four “progressive amendments” that took place from 1890-1920. be sure to identify who the