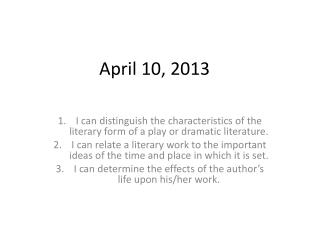 April 10, 2013. I can distinguish the characteristics of the literary form of a play or dramatic literature. I can relate a literary work to the important ideas of the time and place in which it is set. I can determine the effects of the author’s life upon his/her work. Bell Ringer. 2013 April 10 Bell Ringer - . get out your analysis chart from yesterday as well as a sheet of paper. today we are using