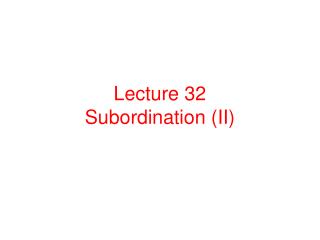 Lecture 32 NOVEL II - . synopsis. comparison between james joyce and virginia woolf a comprehensive talk on the lord of

Subordination - . order, emphasis, and word relationships. whereas coordination organizes text, it does not emphasize or

Subordination - . idea dependency . a group of words where a subject-verb relationship is present. review . a group of

Lecture 32 - . an overview of topics. chapter 01 businesses, multinational corporations and basics concepts of

LECTURE 32 - Glycobiology of animal fertilization # 2 may 23, 2002 v.d. vacquier the use of plant lectins to study