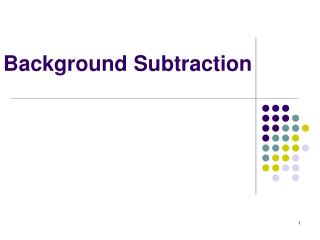 Subtraction - . click on the button to begin. practice practice subtraction problems on the following pages. solve the

Effects of Post-processing on Background Subtraction Algorithms - . donovan parks. outline. what is background

Subtraction - . the arithmetic we did so far was limited to unsigned (positive) integers. today we’ll consider negative

Subtraction … - . with regrouping!!!. when you subtract, you should always start with the ones place and work your way

SUBTRACTION - . using a number line to count on…. using the complementary addition method. welcome to the subtraction