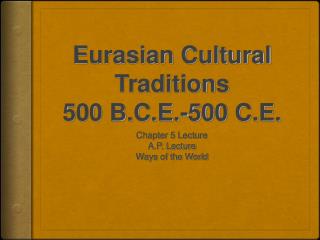 Ancient and Native Tribes - . designed by billie ann branum. what ancient group. who? what? why? when? how?. vocabulary.

Traditions and Customs of The United States of America - . thanksgiving. presentation by: joseph lin economic officer

Cross-cultural Encounters - . scenarios we need to be able to interact effectively with people from other cultures. these