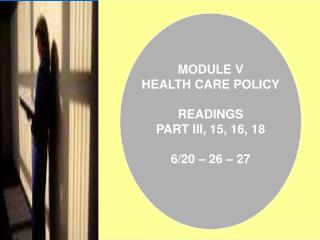 MODULE V HEALTH CARE POLICY READINGS PART III, 15, 16, 18 6/20 – 26 – 27. Why Not The Best? U.S. Health Care in Comparative Perspective. “OF ALL THE FORMS OF INEQUALITY, INJUSTICE IN HEALTH CARE IS THE MOST SHOCKING AND INHUMANE” MARTIN LUTHER KING JR. . What Does Health Care Reform Mean for You ? - . david b. kendall senior fellow for health policy, third way montana talks

School of the Word - . the gospel and the gospels module 3: what is a gospel?. part 1. module 1: the current context of

Health Care Reform Where are we now? What might we do? - Beacon community meeting - seattle, july 13, 2010. elliott s.

Health Policy and Politics - . an overview and the issues. best health care infrastructure in the world. health care is

The role of insurance in health care, part 1 - . today: why health care is important to study; the advantages and