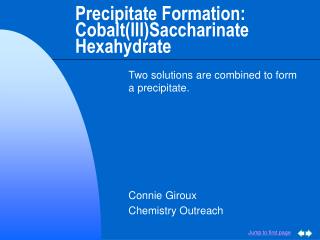 Precipitate Formation - . when two clear solutions are mixed a blue precipitate is produced. purpose. to observe a double

Formation of a precipitate - Topic: reactions in aqueous solution do now : label the following at ( aq ) or (s) 1. nabr

Precipitate - . (v.)to fall as moisture; to cause or bring about suddenly; to hurl down from a great height; to give

Precipitate - . (v.) to fall as moisture; to cause to bring about suddenly; to hurl down from a great height; to give

Formation of Precipitate Lab &amp; M.O.M. Color Lab - . signs of chemical change. there are a number of observations

III. Soil Formation - . soil is an important natural resource because it is essential to life on earth! it is found

Precipitate Reactions - . l.o. i can state which are spectator ions in a precipitation reaction. i can make a clean dry