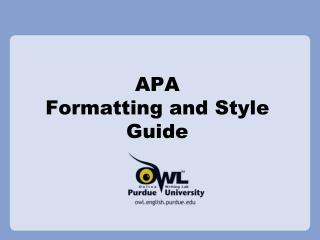 APA Formatting and Style Guide. What is APA?. The American Psychological Association (APA) citation style is the most commonly used format for manuscripts in the social sciences. APA regulates: Stylistics In-text citations References. APA Style: Point of View and Voice. Use:.

XSL Formatting Objects - . xsl-fo. why xsl-fo? some history. the history of html shows that, in the early days, both its