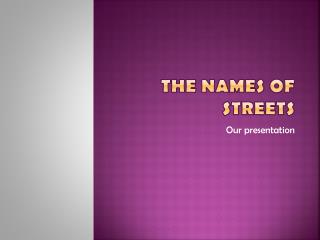 The names of streets. Our presentation. Main information. Seminary of the Streets - Worship so they took him and brought him to the areopagus and asked him, may we know what this

Code of the Streets - . the development of an oppositional sub-culture a response to “alienation” the code

Maggie: Girl of the Streets - . by: stephen crane. text- to- text. maggie compares to the book redeeming love. in

The Streets of Rage Trilogy - . by: sega. streets of

Hit the Streets - . november 25. do you remember?. what are some times when you have been in a large crowd? what thoughts

Streets of London - . by ralph mctell. ralph mctell (born ralph may in farnborough, kent, england, 3 december 1944) is an

The Names of God - . el- roi. “the one who sees”. introduction : el roi first appears in the scripture to hagar ,

The Names of God - . gen 21:33 and abraham planted a grove in beersheba, and called there on the name of the lord, the

The Perception of Names - . jennifer a. moss founder &amp; ceo babynames.com. it is said that when you meet someone

Names of the Musicians - . our singer: harriet rogers our drummer: boris harvies our guitarist: the teddy. harriet

The Names of God - . hallowed be god's name. “ ...stand up and bless the lord your god from everlasting to everlasting.

Praying in The Names of God Praying The Names of Jesus - . lecture 2 in the series praying to get results by john