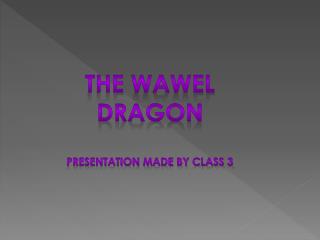 The Wawel Dragon Presentation made by class 3. Once upon a time in Krakow there lived a King with his daughter, the beautiful Princess. They lived in a castle next to the river Vistula. The castle was on a hill called Wawel Hill. Wawel - . contents where is it? beginning of exist where and how? kings of the castel fame set-back finish of exist our

Wawel castle - . the wawel castle ( zamek wawelski ) served as a royal residence and the site where the country's rulers

AND THE DRAGON WENT AND MADE WAR … - . so it is true that the word of god would go out … but it never comes back void

The Komodo Dragon By JiWhan - . the introduction:. hello! today i will tell you amazing facts about komodo dragons! my

Dragon Gets By - . spelling: list a. vocabulary. balanced —even; not too much of one thing dairy —foods made from

The Dragon - . i am the only creature , that can do, what i can do. i breath fire , my skin is toxic , my tail is leaking

Dragon, Dragon - . by john gardner. dragon, dragon. setting the story takes place in a kingdom far away, but in modern

Dragon, Dragon - . problem. a kingdom is upset by a dragon. this is not unusual. what is unusual is that the dragon

Dragon, Dragon - . by john gardner. setting up the vocabulary section in your reading journal. selection vocabulary +

Dragon, Dragon - . by john gardner. there was once a king whose kingdom was terrorized by a dragon . the dragon was a