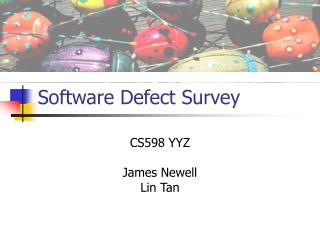 Software Metrics and Defect Prediction - . ayşe başar bener. problem 1. how to tell if the project is on schedule and

CS590 Z Software Defect Analysis - . xiangyu zhang. what is software defect analysis. given a software program, with or

survey software - Surveymethods is an award-winning online survey tool, with powerful but easy to use features at an

What Is Defect Removal Efficiency In Software Testing? - Http://qatestlab.com/ defect removal efficiency is a weighty