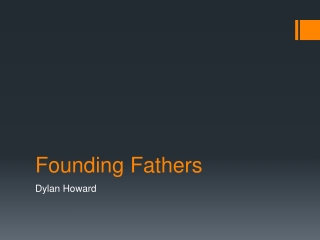 Founding Fathers. Dylan Howard. Background:. This was released after the President’s push for Patient Protection and Affordable Care Act and The Wall Street Reform and Consumer Protection Act. It was published on Investors.com. 2009. Who are the men in this picture?. The Founding Fathers - . troy peters. benjamin franklin: jack of all trades. he created the first fire department and

Founding Fathers Presentation - All of you have been assigned a founding father to research : you must answer the

Our Founding Fathers? - . who were they?. george washington. appearance: tall, built, and a superb athlete led the