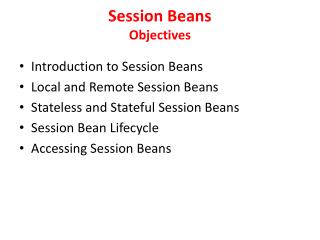 Session Beans - . a session bean represents a single client inside the j2ee

Session Objectives - . as a result of participating in this session, you should be able to: define and describe the

Session Objectives - Overview: maternal and child health in resource poor settings or: the world is not flat hserv/gh 544