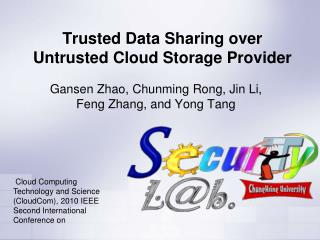 Cloud Storage provider - . these files can be stored and accessed when required. with cloud storage, the services may be

Why and How to Build a Trusted Database System on Untrusted Storage? - . radek vingralek star lab, intertrust

CLOUD STORAGE - . how to store files in a virtual cloud leila b. quick survey. does anyone have a lot of files on their