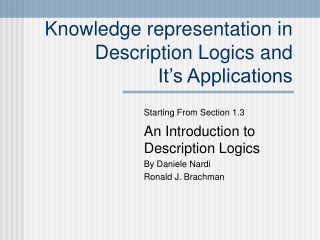 Ontotherapy: or how to stop worrying about what there is. Yorick Wilks Computer Science University of Sheffield, UK - 2.

KNOWLEDGE REPRESENTATION - . k nowledge representation (kr), as the name implies, is the theory and practice of